Other than the occasional Halloween costume, I don’t pretend to be a crafter.  There was that one time with the baby gym, but that was in the days before Pinterest.  And now that my eyes have been opened to the true craft perfection that is Pinterest, I realize how far away I really am.

Which is…pretty far, actually.  I’m recalling another past crafting attempt involving green Rit dye and…hunh.  I no longer remember what I was trying to make!  Isn’t that funny?  The one thing I do remember is that we no longer have a working pasta pot.  So there you go.

But I thought I’d try my hand at making playdough.  Because, well…I’m a pretty awesome cook (pats self on back).  And a pretty awesome baker – and there is a difference!  So given my mad kitchen skills, playdough *should be* simple.  I can throw down a mean macaroon!  How hard can playdough be, comparatively?  (And I’m talkin’ the fancy french macaroon, not the disgusting coconut one.  Please.)

So we tried this recipe which supposedly makes the “best playdough ever!”  It turned out amazing.  And I’m not even being sarcastic.

So.  We made another batch.  Pax requested “wed” (said in his seriously deep baby voice).

But…I was distracted, helping Raines knead a still-warm batch, trying to prevent it from getting sticky.  And the wed/red batch burned.  Like smoking, burning, blackening the pan burned.  OH SH*T.  THE PAN.   Not just any pan, but Mike’s favorite sauce pan.  I am dead.  Like ohmygodhewillkillmedead dead.  So I run around like a crazy woman, trying to (inexplicably) save the burned playdough and the pan.

I realize that it is much dryer than my first batch.  And much (much) smaller.  Most of it was just charred to the bottom of the pan.  The pan!  Back to the pan!

I’m frantically at the sink, but the pan is really too hot to try anything useful.  So I soak it.  Sigh.  Now all I can do it wait.  See if I can scrub it out somehow, or find something to–

I turn around. And am greeted by this sight:

The flour stretched all the way though my dining room, into my living room.  And it wasn’t just flour.  Oh, no.

See that puddle?  It’s water.  Which made everything all the more head-bangingly slippery.  Or, from the boys’ perspective, more fun. 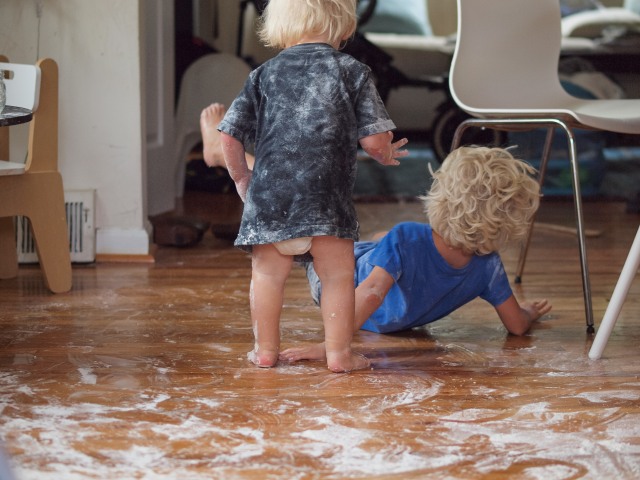 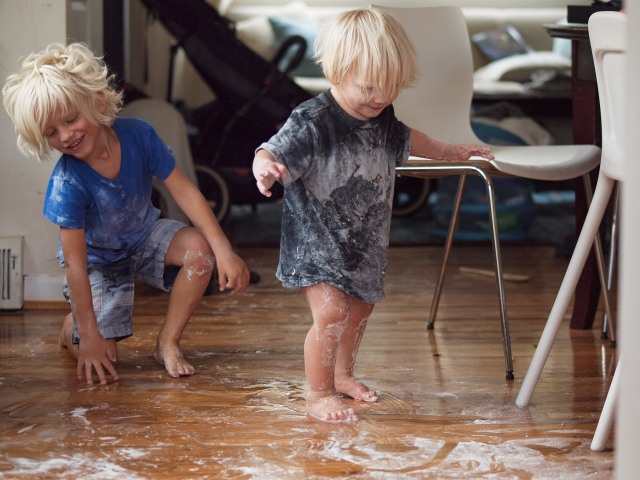 Getting back up for another round 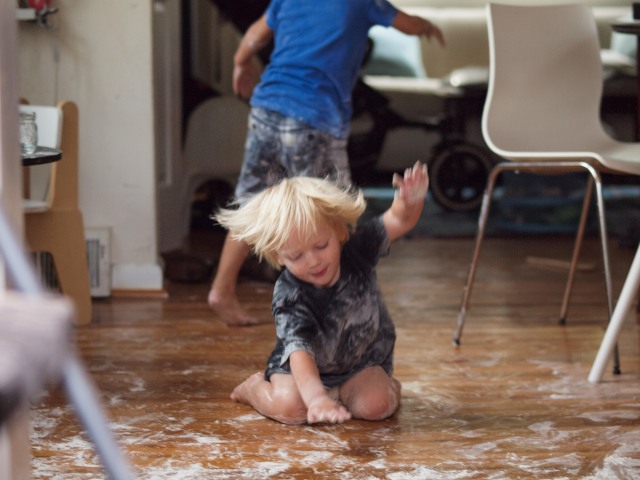 OMG I have no words

Eventually, they tired.  And really, I did just let them play.  At that point, did it really matter?  The mess was already made.  So I had a choice:  To just let it go, and allow them some fun, the kind of fun that only a one-year-old and four-year-old could possibly enjoy…or step in, all pissy, and shut it down.   Either way, I was looking at over an hour of cleanup.  Either way.  So I took a deep breath, and let it go.  I even laughed.  They were both delighted.

Once they were done, we got out brooms and swept up the mess.

It looked the same.  Crap.

The water had basically glued the flour to the floor.  At this point I started to regret my “let them have their fun” decision. GAH! STUPID ME!  So then we got out buckets of soapy water and rags.

It looked a tiny bit better.

Then I remembered that my friend Sarah had sent me some microfiber cloths?  Norwex, I believe?  Anyway, on my hands and knees I scrubbed with that little Norwex cloth.  FOR OVER AN HOUR.

Raines did have the courtesy to cheer me on, “You’re doing SUCH a GOOD job, MUM!”  And shockingly, he and Pax did clean with me the entire time.  Pax would dump water, R and I would yell, and R would clean it up while I scrubbed.  Not the most efficient cleaning crew, but we were a persistant one.

Anyway, by the time we finished, the floor looked clean-ish.  Close enough, anyway.  I figured that time would wear down the remaining flour.  (And it did!)

And Mike’s pan?  Inspired, I took another Norwex cloth to it.  Baby looks like new.  Ahhh…(sigh of bliss).  And by the time Mike got home from work?  Our house looked spotless, and our homemade playdough was on the kitchen counter: 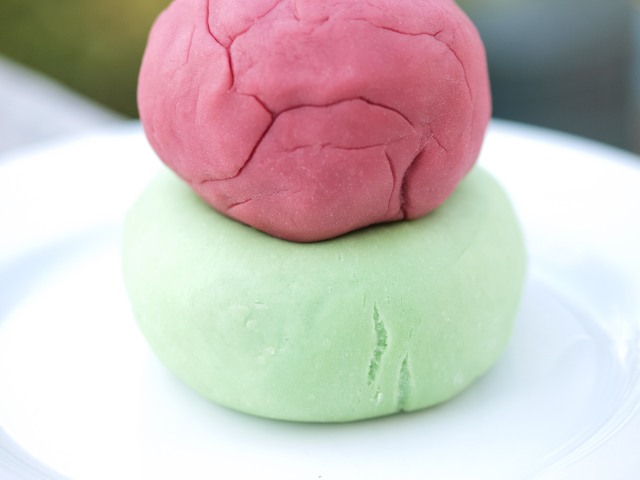 I just shrugged.  You know.  I’ve got that touch*.

*touched in the head