This might just be me…but there is something about one’s first child.  At least mine.  Something that makes me pause.  Something…that breaks my heart.  With my first child, I learned more about myself than I did him.  And I learned a lot about him.  I became a mother, I learned what unconditional love looked like.  And for the past three years, unconditional love, to me, looks like Raines.  It’s like Raines and I were in the same orbit, revolving around each other.  Our connection was insanely tight.  And still is, I guess.  But not quite the same as it once was.  This boy, who used to track me with his eyes everywhere I went, is now allowing others into our orbit.  Or, more accurately, drifting out of our orbit.  Hence my heartbreak.

They say parenting is a constant process of letting go.  This will, forever, be my hardest lesson in life.  Raines is only three and I’m already fighting off the urge to cling.  Cling to my little boy, my baby.  To his crazy, fuzzy hair, to the way he snuggles after he wakes up (which is often the only time he wants to snuggle these days).  To his dimpled elbows – the rest of him is starting to look so boyish…only the babyfat on his elbows gives away the fact that he was – so recently – a chubby baby.  My chubby baby.  I know watching your children grow is one of life’s most amazing gifts.  I just wish it didn’t also make me so sad.

I was so worried, while pregnant with Pax, about Raines.  I was worried about how he would react to the new baby.  Hell, I worried about how he’d react to the pregnancy!  The fact that my stomach was growing, he couldn’t fit on my lap, that I had to stop chasing him around…so much guilt.  So much worry.   And then, once Pax was born….I’ll never forget the look on Raines’ face when he came to visit us in the hospital.  So brave.  So unsure, but trusting.  Trusting that everything would be OK.  And it was.  But it was hard on him, so therefore it was also hard on me.  My heart will never be my own.  It’s his.  And now, it’s also Pax’s.

But things do feel different with Pax.  The love is no less (goodness, it’s all I can do to keep from licking his delicious little face), but it feels less…monumental?  Less surprising?  I simply wasn’t prepared, with Raines, for kind of love you feel for your child.  It truly is mind-blowing.  At least it blew mine.  With Pax, I was ready for it.  I knew it would come.  And it did — my expectations were met (in the most amazing possible way, face-licking tendencies included).  But for a while, my worry over Raines, his reaction, our changing relationship….these things did get in the way of bonding with Pax.  I somehow felt like I was betraying my Raines.  But Pax, bless his little heart, was oblivious to my inner struggle, and would calm at the sound of my voice, and snuggle into my neck, reminding me that he too was mine.  And Raines?  He was fine.  He had a hard couple of nights, a few extra tantrums, but for the most part?  Life just happily went on.

I feel like I’m now starting to figure things out.  The three of us, alone all day together, are getting into a groove.  Pax, despite his chunky size (we’re talkin’ serious fat rolls on the thighs) is still very much a newborn who sleeps most of the day.  But when he is awake, he entertains both Raines and I with smiles, “funny noises” (according to Raines), and huge poop-plosions.  (When asked about his brother in Target the other day, Raines replied, “Poopy Pax?” )  Raines is, much to my delight/chagrin, very much a typical three year old: either totally enchanting or completely psychotic.  And while he is expanding his circle – Mike is often R’s favorite now, and R asks about his friends more and more – he and I and Pax are having fun.  We’re buddies. 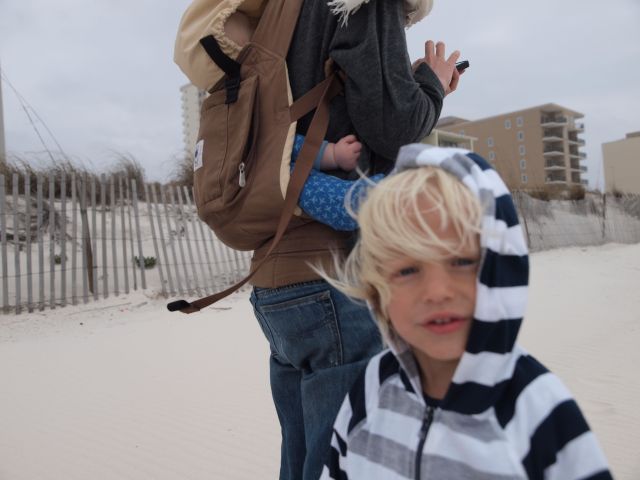 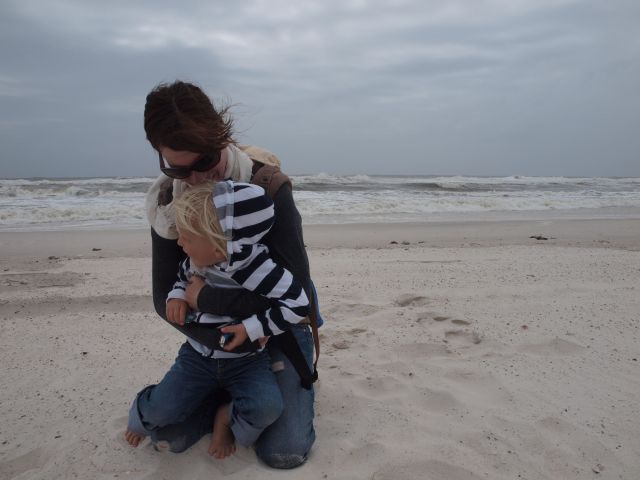 Can you see little Pax on my back?

This entry was posted in Pax's First Year, Raines - 2 Years. Bookmark the permalink.

5 Responses to Breathe and Expand