Why My Mom Finds Me Funnier Than Anyone Else Does… 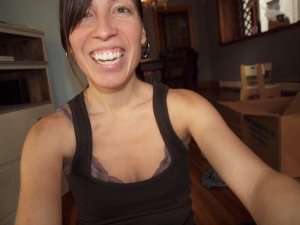 Raines took this picture of me. I am laughing, really hard, at him.

The lights are out.  Raines and I are snuggling in bed.  I sneeze.  In the semi-darkness, I can see Raines put his finger up to his lips, very seriously.

I start giggling.  I feel like I’m in church and have just been shushed by the church lady.  Raines, somehow, gets the joke.  Or at least that it was a joke.  His.

A few weeks ago, we were taking a shower.  Or about to.  I always turn the water on to full heat to warm it up, then back it down to a temperature we both can stand.

Mike is not allowed in — he likes it too cold for both Raines and I.  “UUNNNGGHAAA!”  whimpers Mike.  “Too hot! Too hot!”, followed by the sound of Mike’s feet running away.

In any case, for one such shower, I was a distracted.  Raines and I were getting in, and I swatted absentmindedly at the temperature dial.  Our shower always takes a minute to adjust, and Raines charged forward.  The little man was hit with a split second of scalding water, followed by several seconds of ice cold water.  “AUGGGGHHHHHH” yells Raines, running from the spray.  I wasn’t far behind him, and was also screaming from a cold blast that had touched my arm.  We both managed to run out of the freezing spray, knocking into each other, the door, and finally, the far wall of the shower.  We stood there for a second, frozen in shock, when our eyes met.  We cracked up.  We were both doubled over, laughing as hard as we could.  “WHOA” said Raines, when he finally caught his breath.  “COLD!“

Laughing along with my 2-year old?  Like we are old buddies?  Wow.  That is such an unexpected perk of motherhood.  But it happens all of the time.  There are countless little moments like these, shared jokes, winks, and smirks passed between us…I’m just in awe.  He’s TWO.   A two-year-old.  Who’s funny in more than a “guess what my two-year-old said today!” kind of a way.  I’m finding that he is, really and truly…funny.  In an exactly-my-kind-of-humor kind of way.

But I guess that it isn’t surprising, when I think about it.  I know virtually everything about him.  I know what scares him, what frustrates him, what he likes, what he doesn’t like.  I know his emotions better than he knows them himself.  I know what he’s capable of, and I know how to listen to his cues about what he’s not capable of.  I know how to soothe him, how to make him upset, how to relax him, how to make him laugh.  And, as it seems, he is also getting to know me.

I think that the heart of humor, of shared jokes — is a certain knowledge.  This knowledge of another person that runs so deep, you don’t even have to think about it.  Something happens, and you know instinctively how the other person feels, and not only that they will think it’s funny, but why they think it’s funny.  And with loved ones, especially family where there’s so much shared history….it just becomes part of you.  I know I find “guy movies” like Wedding Crashers or The Hangover SO HYSTERICALLY FUNNY partly because Mike (and who he is) is so much a part of me.  Is humor just another way of empathizing?

Raines was having a tough time waking up from his nap.  We rocked for a while, read a book, then ventured out onto the porch.  He had some toys, but was still a bit whiny and generally unhappy with life at the moment.  I cut open a peach, and offered him half.  He took it, grumpily.  We ate our peaches in silence.  Then I caught his eye: “Cheers“, I said, holding out my peach half.  He got the joke right away.  “Cheers!” he responded, his eyes glowing, touching his peach to mine.  I winked.  He smirked, then giggled.

We have a million of these stories, Raines and I.  Already.  I think about what my mother must know about me.  How many little bits and pieces of memories, of shared jokes, she must have of me, tucked away somewhere.  She certainly has more than I do.  Raines’ real long-term memory is just developing.  So these jokes already between us will, eventually, only be remembered by me.  It makes me a little sad…but I do realize that he and I still have a million more stories and jokes to share — increasing, really, as he grows.

I know my sister will agree. 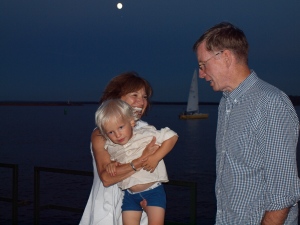 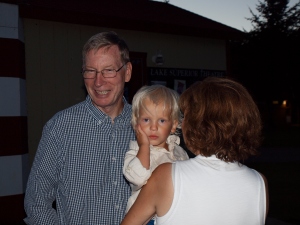 This entry was posted in Raines - 2 Years, Talking. Bookmark the permalink.