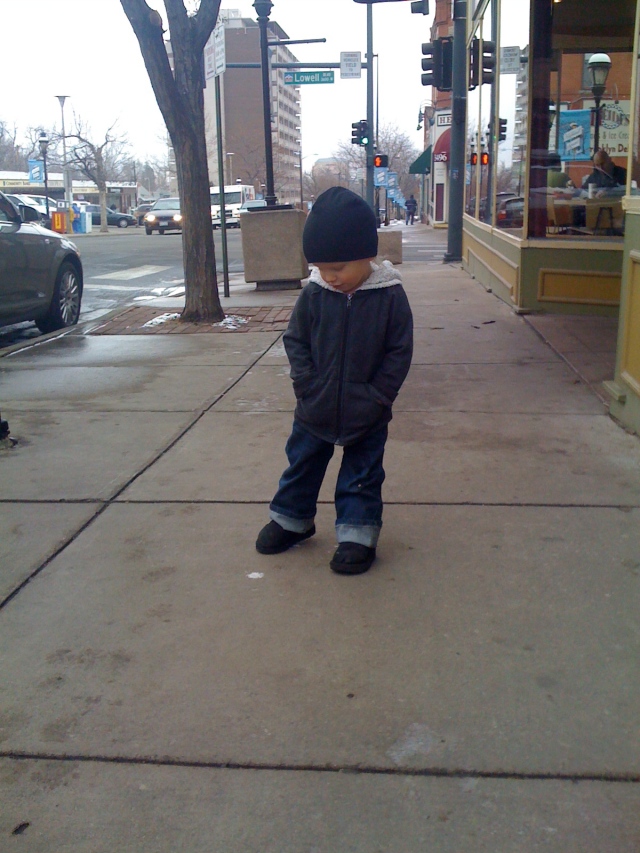 I was getting ready for work.  Raines walked into the bedroom, eyes downcast, lip out.  “Little bit sad, Mum” he says.

What do you call a whole week filled with sand castles, mud pies, shell collecting, beach soccer, long walks, running in and out of tides, watching sandpipers, flying kites, and poking at jellyfish washed up on shore?  Pure bliss for both Raines and I.  We would literally be out of the condo and down on the beach the second we finished breakfast.  And usually back on the beach again after naptime.

It was fun watching Raines – we would often play together, which is pretty normal – building sandcastles, etc…but it was also fun to watch him explore on his own.  He’s just starting to show more independence.  He’d go walking off down the beach, every so often stopping to look at something and throw sand.  That’s the beauty of an off-season beach town.  There’s just so few people.  And the few people that were there were all retirees.  Most would stop by on their daily walk to talk to Raines, show him the fish they caught, or see the two of us together and start talking about when their kids were young.  It was almost tender.  I felt honored that we could bring back such memories.

The shell collecting, however, was pretty serious business.  The grand prize?  If you could find what the retirees called “olives”.  They were little rolled shells, often intact, that would roll up on the beach.  I’m a pretty dedicated shell hunter, but with a two-year-old in tow, I just couldn’t compete with the elderly ladies walking the beach at 6AM.  I found only one olive.  A tiny, tiny one.    That Raines promptly threw back into the ocean.  Of course.  That’s when I started “Mummy’s Special Shell” collection.  Good thing Dad had two buckets and shovels waiting for us.  The retirees would hardly get misty at a mom yelling “my bucket!  my shells!” at her two-year old.

Raines did pretty good, all things considering.  Dad’s style is a bit stricter than mine when it comes to mundane matters (I think it’s a generational thing – Dad’s BFF Al is known as “grumpy grandpa” by one of his grandkids) so after a while Raines clearly saw Dad as someone worth testing.  I was secretly proud.  Raines, despite his easygoing nature, is certainly no pushover.  Besides, Raines and Grandpa would curl up together for long book reads and lots of wrestles.  And Nana just loves him to pieces.   Clearly the kid feels the love – the first morning back in Denver Raines woke up asking for “Nana and Grandpa???”  When I explained that they were back in Gulf Shores, Raines, not liking my answer, went running through the house looking for them….and came back in the room crying.  [sob]

What an amazing trip.  I haven’t gotten all of the pics off of our camera yet, but will upload my favorites this weekend.  Here are a few of them:

This entry was posted in Raines - 2 Years, Talking. Bookmark the permalink.