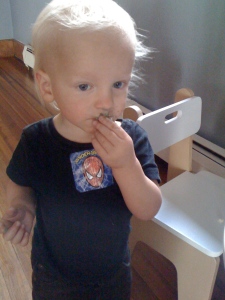 My baby is becoming a little boy.  He is talking up a storm.  So many of his words are completely unintelligible, but he’s trying.  I love his perspective on the “hard” words.  I came walking out the other day in a tank top.  Raines pointed to me and said, “shirt!”  “Yes!”  I replied.  “It’s a special kind of shirt called a tank top.  Can you say tank top?”  Raines thought for a moment.  Then, “tee tik ta ta tee tik TOP” he states proudly.  “Buffalo” was a similar situation.  It came out as some bizarre multi-syllable word, complete with lots of tongue thrusting (buah bah lo lo lo lo lo).  He’s not alone in this method.  His little buddy Magnus, pronounces helicopter “da ga ga ga ga ga” with great emphasis on the first ga gas.  It’s like he’s saying “That thing, you know?  Flys in the sky?  That unnecessarily complicated word?  Whatever.  Da GA GA ga ga ga ga is all I hear.”  I’m reminded of the Peanuts cartoons.  We must sound like the adults in that cartoon at some level (Mwah MWAH mwah MWAH mwah mwah).

After last Friday, Raines has the word “shot” down pat.  He had to get his flu shot, and when I checked in, they reminded me that I never made him an 18 month appointment.  They have those?  Apparently the 18 month appt is rather important, so they actually just shuffled schedules around to get us in then.  The poor little guy had to get another 3 shots.  But…(evil giggle)….Mike was with me, so I put him on shot duty.  He’s never witnesses Raines’ shots.  It’s awful.  Raines was writhing in pain and shrieking from the depths of his soul.  Mike was doing pretty much the same thing.  In all seriousness, Mike did pretty well.  I’m sure nurses are used to grown men screaming at them.  Joking again.  In reality, Mike was very comforting to Raines, who didn’t notice that his Dad was pale, shaky, and ready to kill the nurse.  As a consolation prize, Raines got a Spiderman sticker and  Mike was taken out for cupcakes.  I don’t think either will be too scarred from the whole experience.  However, I have noticed that Raines was answering “how was your day” type questions with one word:  “SHOT.”

Raines has a bit of trouble with “ffff” sounds.  I discovered this one day when Raines was having a fit because he apparently couldn’t find his “chome.”  Or perhaps he had his “chome” and didn’t like it?  Or I had the “chome?”  Or he wanted more “chome???”  I was at a loss.  Finally, as I’m in the middle of this totally heated debate with my 2 year old (Chome!  No chome?   Chome!  More Chome? CHOME!!) my mother called.  I answered, and Raines went apoplectic.  I got off the phone and Raines ran to me and ripped the phone away.  “CHOME” he said tearfully, clutching my phone to his chest.  “CHOME.”  Of course.  It has all of his sweet iPhone apps on it.

These kiddos know more than we realize.  Much more.  The first day of our huge October snowstorm, I ran to Target nice and early for a sled.  Mike was staying home that day, so I returned,  victorious and beaming, to both of them, a new blue sled in my hand.  Before I could get a word out, Raines pointed to the sled and said, quite clearly:  “Sled.”  Mike and I looked at each other, shocked.  “Did you?” I ask.  “No! Have you ever mentioned sleds?”  “Nope,” I reply.  With confused looks on our faces, we turn to Raines.   “Hey buddy!  How did you know it was a sled?”  Raines does the two year old equivalent of an eyeroll.  “Blue” he adds.

But without a doubt, Raines’ three favorite words are draw (he’s completely into art), self (this just started – he uses it when he wants to do something by himself) and boobs.  As in, “mummy’s boos”, followed by a point at my chest, or a pull down of my shirt.  Or sometimes he’ll say it all dreamy-like as he’s trying to feel me up:  “mummmmmy’s booooooosss”.  It could be the downside of nursing a toddler.  Or it could just be genetics.  It’s pretty funny to see two sets of eyes glaze over when I turn around topless.  “Ahhhh….booooooss”

I must say both “yeah” and “nope” quite a bit.  Because Raines uses these words.  A lot.  His “nope” cracks me up.  There’s lots of emphasis placed on the “p” sound.  It sounds so definite, so confidant that he DOESN’T want whatever it is I’m asking.  But the “yeah” drives me crazy.  “Yes” is proper English.  But I know the “yeah” comes from me.  Especially since he uses it when he’s considering something very seriously:  “ummmmmm….yeeaaaah.”

This entry was posted in Raines - 1 Year, Talking. Bookmark the permalink.